The benefits of meditation music 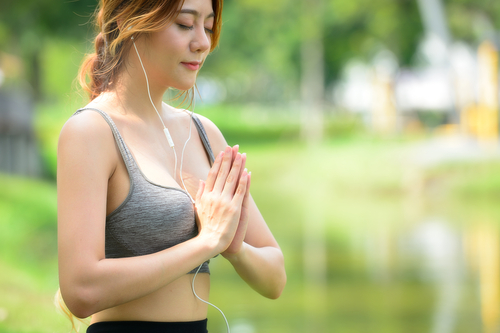 Music to enhance and support the meditative experience

When Steven Spielberg created his plastic and mechanical shark in 1974 for the film Jaws, it would have been nothing without those two ominous bass notes on the contrabass from John Williams’ score.  Those 2 notes represented all of the terror and fear of Great White Shark and it terrified the world at the time.  So music in film heightens the emotions, creates fear, tension and stress to increase are watching pleasure.

Music in meditation fulfils a similar role. It relaxes the meditator and puts them quickly into a calm receptive state ready to begin meditating.  Having composed music for films and television for over 30 years, I learnt that the music must never overpower the moving image but must support and enhance the film in subtle ways. It must never compete with the spoken word but should sit in the deep and high frequencies away from the mid-frequencies of the spoken word.   The same principles apply to music for meditation which must never overpower.  It is there in a vital but supporting role.

If you listen to guided meditations from the great gurus of this age, you will almost always hear music in the background creating the necessary backdrop, preparing the mind to go deep into the meditative state and relaxing the mind and taking away the endless chatter of the “monkey mind” as the Buddhists call it.

Again referring to the world of film and television music, a lot of television programmes/documentary films use what is known as library music that has been pre-composed to cover every type of genre of programme/film.  It is usually possible to detect this music as it is used again and again.   There is a whole world of difference with especially composed music which responds to the highs and lows of the moving image enhancing just at the moment when a dramatic or important point occurs in the film/programme.   The same is true of music for meditation.  I have composed a lot of music for meditation where I am listening to the words of the meditation guide and responding to the highs and lows of the words being spoken.   So the music is unlocking and releasing an emotional response in the listener corresponding with the words being narrated by the meditation speaker.

Music can of course be a form of meditation in its own right.  So the meditator would get themselves into a comfortable sitting position with the music in the background and they would focus on their breath, taking deep breaths from the bottom of their diaphragm and let the music flow over them as they move themselves into the meditative state.  So some meditation music might just be very subtle and non-intrusive like the music on my Dream Zone and Dream Zone 2 albums where there are no distractions in the music.  It is just intended to create that deep relaxing state that is the essential precursor to a deep meditation.

It is also possible to take a piece such as a famous relaxing classical piece of music, an Indian classical raga or some Indian bansu flute music and listen to the music with open mind focusing on the beauty of the piece and letting the music take you on a journey.  We are moving into the flow of the music.  Psychologist Mihaly Czikszentmihalyi defines flow as “the state in which people are so involved in an activity that nothing else seems to matter”.  He further goes onto describe this state as hyperfrontality in which our sense of self temporarily deactivates and the parts of the brain that generate feelings of anxiety and self-doubt are subdued.

The monkey mind with its endless questions of self-doubt is suspended as we use the music to take us away from the conscious mind and into the realms of the sub-conscious mind. We are opening ourselves up to move away from the troubles and strifes of daily life and escaping into a world where we are connected with the universal consciousness and ready to receive love and divine guidance.

The Science Behind Meditation Music

A scientific study [1] at McGill University in Montreal, Canada in 2011 lead by V. N. Salimpoor showed that listening to music and the prospect of listening to music the brain released the chemical dopamine into the brain.  Dopamine is the happiness neurochemical.  The McGill study also showed that listening and performing music (singing or playing an instrument) also release serotonin (the hormone which contributes to happiness and wellbeing), oxytocin (the so-called “love hormone” which causes feelings of trust and wanting to bond or cuddle up) and prolactin (a hormone which bonds people together).

In 2001 neuroscientists, Anne Blood and Robert Zatorre at the same university used magnetic resonance imaging to show that music activated the limbic and paralimbic areas of the brain which control our emotions and are connected to euphoric reward responses like those we experience from sex, good food and addictive drugs.

It has been proven that listening to quiet, classical music can significantly reduce stress (Khalfa[2] et al, 2003, Labbe’E[3] et al, 2007).  The stress chemicals (fight or flight) cortisol and ACTH (adrenooticotropic hormone) are released into the brain during stressful situations.   In a study in 1993 by Escher showed a significantly lower level of these chemicals being released into the blood when the patients who were undergoing endoscopy listened to their favourite music during the procedure.  In 1995 Brownley[4] and his associates measured the effect of music on trained and non-trained runners and found that fast music beats actually increased cortisol levels.  In a recent study by Cioca at the University of Medicine and Pharmacy in Bucharest, Hungary, classical music was found to have a significant effect on listeners’ cortisol levels. This applied to healthy subjects and depressed subjects with equally dramatic results.

Meditation music is slow and usually in a major key which makes the western brain think of happy and pleasurable thoughts thus suppressing cortisol and ACTH and increasing the “feel good” hormones of dopamine, oxytocin, prolactin and epinephrine.

When I compose meditation music, I fix my intention before I start the composition process to provide healing and deep relaxation to the listener.  This intention is then embedded into the music ready for the listener to unlock.  This might sound like a lot of New Age airy fairiness.  However, Bruce Lipton, a renowned cellular biologist and author of the book The Biology of Belief says that the energy of our thoughts and feelings are not contained inside of our mind and body but are “broadcast” in an electromagnetic field in the body (about 60 times greater in amplitude than the brain) and when 2 or more of us gather with shared energy of intent, that energy multiplies, forming a “collective field” of harmonic resonance.

Dr Masaru Emoto in the 1990’s carried out pioneering research exploring the transformational impact of words, prayers, music and environment on the crystalline structure of water.  He established that water has the capacity to absorb, carry and respond to our intentions.  Lynne McTaggart has also been conducting a series of mass experiments using the power of intention to achieve philanthropic intentions such as counteracting global warming, purifying contaminated water and healing wounds.  The scientist and sound engineer, John Hutchinson used the 528 Hz frequency using audio and radio waves to heal the oil polluted water in Perdido Bay in the Gulf of Mexico following the BP oil disaster in 2010.  The application of the frequencies actually cleared the oil from the water and caused oxygen to bubble up from the ocean bed.

In the same way, music has the same capacity to be “programmed” with the intention of the composer.

Binaural beats were discovered in 1839 by Heinrich Willhelm Dove. The concept behind them is that when you play tones through headphones below 1000 HZ where the two tones are less than 30 HZ in difference apart a perceived beating occurs in the brain and this perceived pulse entrains the brain into the various waves (alpha, beta, delta, theta and gamma waves).  The theta waves (non rapid eye movement) are the patterns that the brain produces when in the deepest and most relaxing part of a night's sleep and so this is the Holy Grail of binaural beats.  So listening to binaural beats can be a perfect precursor to a deep meditation session or can be a meditative exercise in itself.

When your brain begins to resonate with the binaural beat meditation or to "follow" the beat, this effect is called the frequency following response.  This phenomenon was thoroughly researched and tested in 1973 by biophysicist, Gerald Oster at Mount Sinai Hospital in New York City.  His research on binaural beats and the frequency following response was published in Scientific American and paved the way for further development in the area of auditory stimulation to enhance brain functioning.

Listening to binaural beats on their own is a little unsettling and so a whole genre of music has arisen where the binaural beats are doing their work in the background and meditation music is layered over the top.

I have composed an album called Binaural Bliss available via my web site in which all the tracks have a sine wave as an undertone to all of the tracks.  This is a pure sine wave which is fed into the left and right channel but programmed to be 10 Hz apart in tone to create the binaural beat.  The music on the top is deep relaxation music so you have the double effect of the binaural beat inducing theta wave relaxation and the meditation music on the top of it.

Meditation music is a powerful tool in the meditator’s armoury for helping the meditator to prepare to enter the meditative state.  The music enhances the meditative experience by clearing distractions and enabling us to enter the relaxed state needed to meditate.  Scientific studies show that the body is releasing powerful hormones such as oxytocin, serotonin and dopamine and suppressing cortisol and adrenaline when we listen to meditation music.  The music itself can be infused with a healing or relaxing state so that our bodies are healed by the music.  Binaural beats contained within the music can actually induce theta wave relaxation rapidly without the usual preliminary relaxation techniques of breathing and bringing the body into the deep relaxation state needed so act as a “fast track” to powerful meditation.   This is the reason why meditation music is almost invariably used on guided meditations.

Back to Main Benefits of Meditation Page