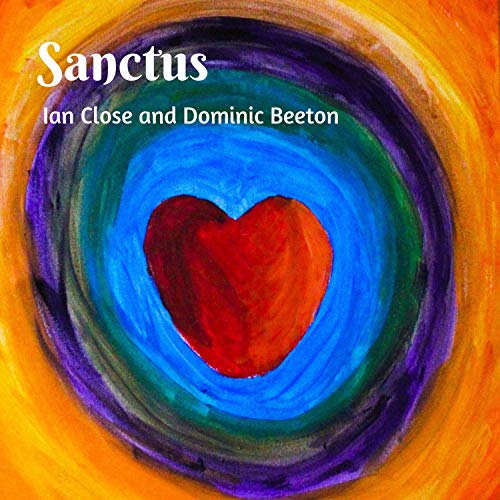 Experienced session musician and saxist, Ian Close has once again teamed up with TV and film composer, Dominic Beeton to produce these 7 exquisitely crafted early music tracks.  Ian has been researching sacred early  music from the 12th and 13th Century and has been transcribing the vocal chant lines for soprano saxophone.  Dominic has been then laying his hallmark new age sounds underneath.  The result is deeply haunting music, full of spiritual depth and massively relaxing and soothing.  Featuring compositions from Hildegard von Bingen, Perotin and Ademar de Chabannes, Sanctus rediscovers these gorgeous pieces and reinvents them for the 21st century.    This goes beyond Gregorian Chant which is a path well worn and forges new ground which resonates in these stressful times when people are searching for calm and peace from the loud din of electronic traffic that fills our minds.  Sanctus means holy and this is truly a holy adventure for these 2 experienced musicians.  The album will be promoted through churches and cathedrals in Europe as these are the natural home for this early music.

The opening track on Sanctus comes from the mass composed by the 11th Century French monk, Ademar de Chabannes to celebrate Saint Marshall of Limoges who Ademar claimed was one of the apostles. As well as being a composer, he was also a historian lived from 989 to 1084.  Despite his attempts to forge documents to support his claim that Saint Marshall was an apostle, he is also ascribed as being the first composer to use music notation.  Whatever, the history behind the mass he composed, this Kyrie is exquisite in its beauty and simplicity of its melody.

Pérotin also called Pérotin the Great, was a European composer, believed to be French who lived around the end of the and beginning of the 13th Centuries.  Beata Viscera celebrates the mystery of the Virgin Mary and was sung during a Mass celebrated for the Virgin Mary.  It is a monophonic conductus

This track was written by the extraordinary, composer and the founder of scientific natural history Hildegard of Bingen who loved from 1098 to 1179 and was also known as Saint Hildegard.  She wrote theological, medicinal and botanical texts as well as songs and poems and invented a language Lingua Ignota.  She is being hailed as a holistic healer and visionary.  This exquisitely beautiful track feels very modern with the Ian Close's soprano saxophone underpinned with a .

This is another Ademar piece taken from the apostolic mass of Saint Marshall. The sublime soprano saxophone of Ian Close is accompanied by Dominic Beeton on Scandinavian pump organ giving the piece a very Early Music feel.

Caritas Abundat in Omnia (Loving tenderness abounds for all)

Another Hildegard composition the words are beautiful :

Loving tenderness abounds for all
from the darkest
to the most eminent one beyond the stars,

Exquisitely loving all
she bequeaths the kiss of peace
upon the ultimate King.

Another exquisite Hildegard composition. Here is a translation from the latin of the opening words:

All things you held in order in your heart,

and through your Word were all created

according to your will.

And then your very Word

that form of flesh

The final closing track of the album and taken from Ademar's Apostolic Mass for Saint Marshall.  Ian's soprano is underpinned by Dominic playing a struck grand piano pad from Reason's Pangea Soundiron instrument. The sound pulses in and out of the haunting weaving solo of Ian Close.

Back to Meditation Music page