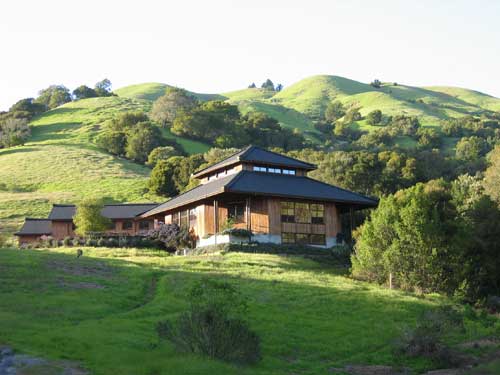 The practice of mindfulness awareness or Insight Meditation is at the heart of the Buddhist based meditation centre set in the hills not far from the suburbs of San Francisco.  Most retreats are silent and the Centre teaches and educates so that people may integrate wisdom and compassion in all aspects of their lives for the benefit of all beings.  The centre was established at Woodacre in 1988 but the retreat centre was opened 10 years later.  Their retreats range from as long as 2 months to as little as 2 nights.  Prices range from $9,860 for their 56 night retreat on their highest sliding scale down to $4,930 for those on the lowest incomes plus a contribution to the teacher.

Founded by famous author and spiritual guru, Jack Kornfield in 1987, the Spirit Rock Meditation Centre offers the atmosphere of silence with walks in nature supported by systematic Buddhist teachings in the ways of mindfulness and lovingkindness meditation. Throughout its history it has attracted some of the greatest spiritual minds in the world including the Dalai Lama, Rama Dass and Thich Nat Han.

Adyashanti is an American born spiritual writer, author of True Meditation, The Way of Liberation, Falling into Grace and The End of Your World. He runs a number of retreats around the States as well as retreats in Holland and England.  The meditation retreats USA based are held at The Garrison Institute in Garrison, New York, Granlibakken Conference Centre on the north shore of Lake Tahoe, California, Asilomar Conference Grounds located on the shoreline of California's Monterey Peninsular (see photo below) and the Mount Madonna Centre located in the Santa Cruz mountains of California overlooking Monterey Bay. All stunningly beautiful locations. Adyashanti  is a spiritual teacher dedicated to serving the awakening of all beings. His teachings are free of ideology or tradition and not aligned to any religion or doctrine.  Trained by zen masters and encouraged to teach in 1996, Adyashanti has dedicated himself to running retreats and satsangs.  His silent retreats last 2 to 9 nights and are on a residential basis only.  The locations are luxurious and prices range from $664 to $1,248 for the accommodation and $375 to $525 for the event fee (depending on venue).  The aims of the retreat are to experience a new opening or new awareness and to deepen one's experience of truth.  Attendees say that he radiates a true enlightened presence

Back to USA Meditation Retreats

Back to Meditation Retreats