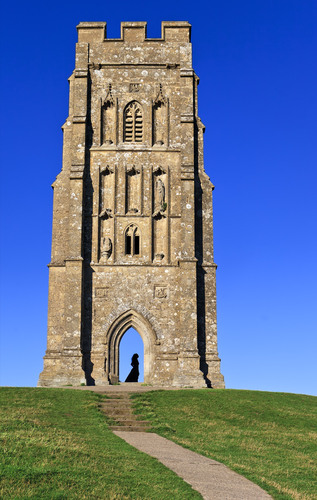 Glastonbury, in addition to being the location of the largest music and performing arts festivals in the world is a mecca for all things spiritual.  Glastonbury has been described as the Clapham Junction of the ley line world in that a remarkable amount of ley lines converge on Glastonbury.  The Tor is the obvious focal point and thousands trek to the top of the hill to visit the Tor as part of their Glastonbury pilgrimage.  The Chalice Well with its open well and flowing waters is the second most popular visitors attraction with  healing properties attributed to the water springing from this natural well which has been in use for over 2000 years and has never run dry.  It is a pilgrimage destination for the followers of the divine female. The town is filled with new age shops and is home to many well-respected spiritual gurus.  Tim Freke, the stand up philosopher and author of Lucid Dreaming, lives here.  Eckhart Tolle, author of The Power of Now lived in Glastonbury in the 1980's.

The history of the town dates back to Iron Age times.  Glastonbury Abbey is one of the most important abbeys in England and was where Edmund Ironside was crowned King of England in 1016.  The abbey was recorded as being established in the 7th century although there are those who believe it was established by Joseph of Aramathea in the 1st Century.  Joseph provided the tomb for Jesus to be laid in after his crucifixion by the Romans.  The Glastonbury Goddess Temple was established in 2002 and is said to be the first temple of its kind to be established in over 1000 years.

Glastonbury has been often linked to the Arthurian legends and was reputed to be the resting place of King Arthur and Guinevere.  This has been challenged by recent scholars.  In some literature, Glastonbury is linked with the legendary city of Avalon.

It is also reputed to be where Joseph of Aramathea brought the holy blood of Christ in a cup, the holy grail.  He was reputed to have approached Glastonbury by boat and placed his staff in the ground from which flowed the Glastonbury Thorn or Holy Thorn.

People often call Glastonbury the heart chakra of the planet.

So in view of all of this, it makes a pretty amazing place for a meditation retreat.

Tim lives in Glastonbury and is a world renowned author and philosopher.  He calls himself a standup philosopher.  Author of over 30 books including The Mystery Experience and Lucid Dreaming. His book The Jesus Mysteries was voted Book of the Year by The Daily Telegraph.  He is charismatic speaker and a warm witty speaker. His retreats explore the mystery experience which he describes as a deep awakening, a knowing of the love and connectedness that is within us all.  He uses music  and simple exercises and his weekend retreats are extremely powerful journeys.  The reviews from participants are ecstatic.  His web site contains countless reviews and testimonials.

Situated just at the bottom of the hill of Glastonbury Tor and on the actual pilgrimage path to the Tor, this is a proper ashram run on bhakti yoga principles of non-violence.  Shekin Ashram is run by Elan Keshava and Radhe plus a team of devotees and volunteers, it provides cheap accommodation for short or long stays to people all over the world.  This is an alcohol, caffeine, smoke and drug fee vegan community where devotional service is part of the philosophy.  Bhakti yoga is based on the concept of living truthfully and peacefully.  The daily practice of bhakti involves silent meditation, the reciting of japa mantras, singing of divine names and music.  Set up in 2003, it provides a refuge and destination for all those seeking peace and awakening.

Healing Waters Sanctuary is situated on the holy site of Wearyhall Hill and is also on the St Michael's Ley Line which connects Glastonbury with Avebury, the Cheesewrings and St Michael's Mount.  It is an inter-faith centre, retreat and bed and breakfast.  They provide a range of retreats including a kharmic MOT and energy healing retreat.  Founded by Juliet Yelverton, the Sanctuary boasts stunning views of the Tor and the Somerset Levels and is founded on the principles of love and compassion.  Juliet is one of the therapists at the Sanctuary.  There are a number of rooms for group meditation including a yurt in the garden which can accomodate up to 24 people in a circle.

The Aramathean Retreat is based on the legends of Joseph of Aramathea who was the rich man who permitted his family tomb to be used as Christ's tomb and from which Christ rose from the dead.  Joseph is reputed to have started the first christian church in Britain at Glastonbury and reputed by others to have brought Christ to Britain or his blood (the holy grail).  This retreat explores the illuminating power of the Christos.  It is run by Lisehanne Webster and Karen Fletcher both experienced healers, teachers and pyscho-spiritual counsellors ably assisted by Lisehanne's husband Tor who runs Tor's Tour of the Tor and other guided tours of Glastonbury and sometimes assists in the Retreats.  In the retreats which can be 2 nights or longer there are a variety of options including getting to know your soul journey, the chakras and recognising your healing abilities.  The prices are very modest.  It is possible just to stay here as a B&B without taking any of the courses or yoga classes.  Aramathea Cottage is situated very close to where the original Aramathean settlers established the first church in the High Street.  The Aramatheans believe in the universal spiritual teachings of the way of love and healing through the Christos.  They also run special winter and Easter retreats as well as a retreat in Greece.