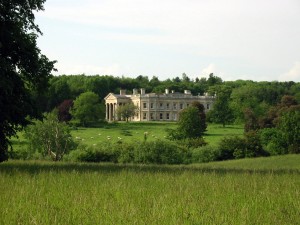 The Madhyamaka, KMC is a Buddhist meditation centre set in 42 acres of glorious rolling North Yorkshire rural scenery in the grand Percy Kilnwick Hall.  This centre is one of 1200 such centres situated in 40 countries around the world based on the principles of Kadampa Buddhism.  Kadampa Buddhism is a Mahayana Buddhist School based on the teachings of Buddhist master, Atisha (AD982 to 1054). The stages of the path to enlightenment or Lamrim as this is called in Tibetan form the backbone to Kadampa Buddhism.  Lamrim is a special set of instructions such that all of the essential teaching of Buddha Shakyamuni arranged in such a way that all of the Hinayana and Mahayana teachings can be put into practice in a single meditation session.

The Centre offers weekend retreats, week retreats, day visits and for those wishing to undertake more formal training can be more long term and consist of weeks or months.  The accomodation is immaculate and modern and there are plenty of places to meditate and find peace and tranquility including the beautiful lake and the dense woodlands.  The principle of service applies as with all Buddhist retreats and so you will be required to assist in the running of the centre if you stay for longer than a weekend.  The current centre was the brainchild of the Venerable Geshe Kelsang Gyatso who has been responsible for setting up the 1,200 centres around the world and is also the author of numerous books.

The Madhyamaka KM Centre has as its resident teacher, Gen Kelsang Thetchen.  Originally from Canada and a disciple of Geshe Kelsang Gyatso for many years, he is an internationally renowned teacher of  Buddhism and meditation.  The whole aim of the Centre is to make the principles of Kadampa Buddhism accessible to all people regardless of age, gender, ethnic background or religious or spiritual leaning.

The Findhorn Foundation was founded in 1962 by Peter and Eileen Caddy and Dorothy McLean.  They first came to North East Scotland to manage the Cluny Hill Hotel in the town of Forres.  Under their helm the hotel became a thriving four star hotel but then after several years the owning company terminated their employment.   They moved up coast and were living in a caravan on a camp site at Finhorn.  Peter Caddy began to grow vegetables. Dorothy discovered that they could contact the overlighting spirit of the plants and via these "angels" they received guidance on how to grow the plants producing extraordinary results. From the barren, sandy soil of Findhorn, they were able to produce a stunning array of vegetables, flowers and plants including the now legendary 40 pound cabbage.  Word spread quickly throughout the world and the garden became famous.

In 1970 a young American spiritual teacher, David Spangler and his partner Myrtle Glines helped to develop and define the spiritual processes which have formed the bedrock of the Findhorn Foundation ever since.

The Findhorn Foundation is a living community and an ecovillage.   A large part of the accommodation is still static caravans from the days when it was a caravan site but the caravans are being gradually replaced with eco houses.  Findhorn has a large community hall for lectures and concerts.  Horticulture obviously forms a key part of the community but sustainable living is now part of it as well.  Findhorn is also an international centre for holistic learning.  The community also extends to the Cluny Centre in Forres where the original Cluny Hall Hotel was situated and extends to the Scottish islands of Iona and Erraid.

The best introduction to Findhorn is via their experience week which last 7 days from Saturday to Friday and includes food and accommodation and has tiered pricing depending on your financial circumstances with the top tier priced at £760 mid price £590 and the subsidised price of £480.00.   You have to fill in an application form which includes a letter describing your spiritual journey to date and reasons for wanting to come to Findhorn and then the spiritual advisers can tailor the course based on this letter.

Back to UK meditation retreats page

Back to main meditation retreats page

Back to meditation retreats : UK

Back to meditation retreats main page